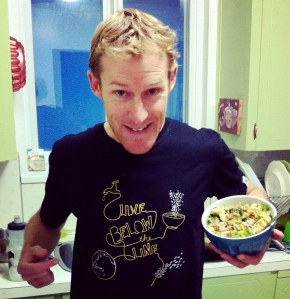 I got an opportunity to do a shop where I could really cost things out and I think I have been living waaay below the line in guessing what I have been eating as yesterday I bought a large potato, broccoli, two apples, onion, bok-choy and can of sardines for under $2 of which I used about 60c!

If you have always wanted to experience developing country life you can now do it at home!

Not exactly but I believe if you take on the Live Below the Line challenge – eating on less than US$1.50/day each day for five days you will get some great insights into how billions of people live around the world everyday from your own country.

This campaign started with two good friends of mine in Melbourne who had previously spent time in developing countries and said ‘Well we have seen extreme poverty, how would you replicate that in a country like Australia?’ And Live Below the Line was born.

Another great way to explain this campaign is to get Hugh Jackman to do it: http://www.youtube.com/watch?v=b2qPhwFokkA

Almost every host I have stayed with on this trip (BTW thank you so much hosts!) I have either guilted or inspired to take on the challenge this May 7-11, sorry guys. My big ask for my trip to others is not for your money but for you to give this campaign a shot!

It is a fundraiser but primarily it is about conversation, thought and perspectives. You cannot regret taking on this challenge – it is honestly a life changer…

But instead of me banging my own drum to death for Live Below the Line I want to share with you a couple of links from others.

The best one comes from a guy who writes a great blog known as Make Wealth History (and he writes grammatically properly and everything!). But he will give you lots of very cool insights in Live Below the Line and his thoughts during his week which he is doing now ahead of the official dates (May 7-11) to promote the campaign – http://makewealthhistory.org/2012/04/23/why-were-living-below-the-line-this-week/ there are also posts with a video, some great comments from others and a great look at the price of food in developed countries.

So only thing left is to sign up eh! Link through from the Global Poverty Porject website: http://www.globalpovertyproject.com

Hugh Jackman advocating for Live Below the Line 2012

Hugh is a great advisor for the Global Poverty Project and the Live Below the Line campaign. His advice and work on our media strategies is so valuable and effective. Hugh has been an important part of the GPP since it’s inception.

A great interview here with Hamish and Andy on Australian radio from last year: http://bit.ly/acIDxk

Hugh Jackman advisor and presenter for the Global Poverty Project

Join in Live Below the Line this May 7-11 – http://www.livebelowtheline.com